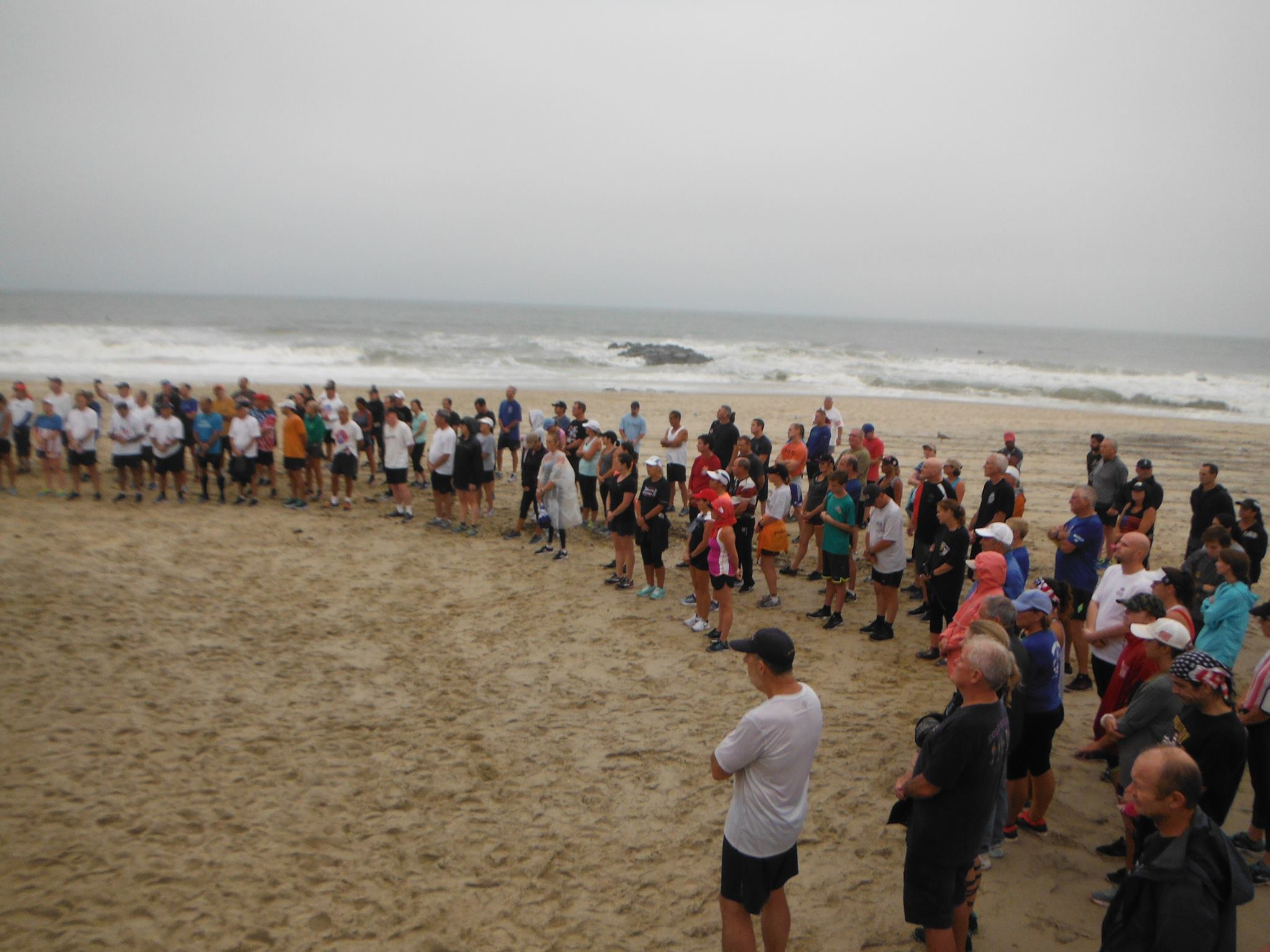 To memorialize all from the Jersey Shore who were lost on September 11, 2001
Belmar, NJ, On the Boardwalk across from Dunkin Donuts on 16th Ave

We start in Belmar with the reading of the first section of names from  the Jersey Shore who were lost on that tragic day. We will run in  Silence as a group to the September 11 Memorial in Spring Lake where more names will be read by all of the runners and flags and flowers will be placed on the memorial. We will then proceed to a memorial as a group again in silence where the rest of the names will be read. After an additional moment of silence we will return to the start. A post run reception will then be held for all of the participants.
There is no charge or registration fee, no t-shirts, no clock, no bib numbers and no awards. It will be your most memorable run of the year.
All are Invited to Commemorate those Lost. 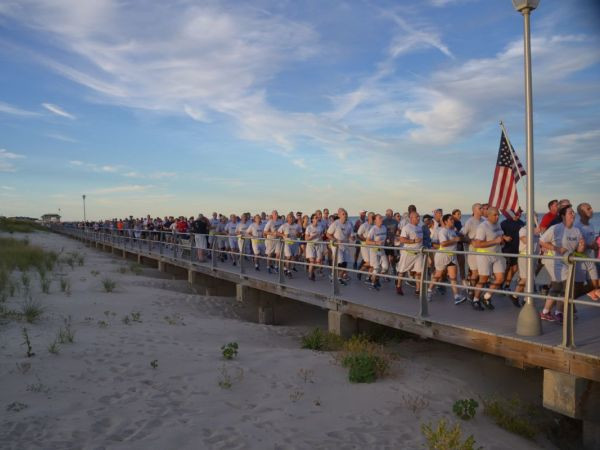 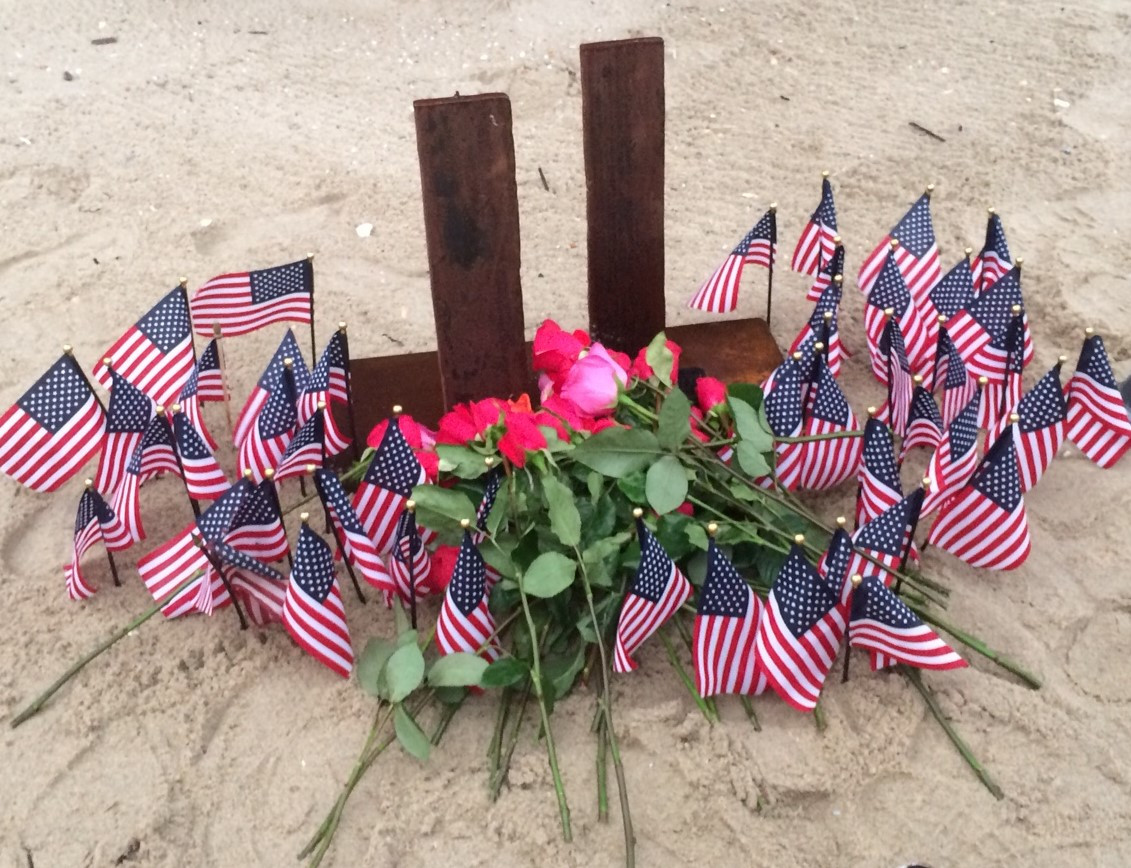 In keeping with our nation's annual demonstrations of solemn tribute to the victims of September 11, 2001, locally two hundred twenty five runners/joggers/walkers, some bicyclists, with hand flags for men and stem roses for women participated in the seventeenth anniversary non-competitive 9/11 Memorial Run organized by the Jersey Shore Running Club (JSRC), at the restored Belmar-Spring Lake boardwalk on Tuesday evening under dreary, rainy summer skies.

The proceedings began at 6 p.m. with Belmar's Tim Mahoney, the Run director, thanking all for coming and also a special few who helped him in his director's tasks. He then asked for a moment of silence for all our servicemen present and past who are making and have made it possible for us to have a memorial event such as this. Then the participants, starting with JSRC President Michael Procopio of Ocean, began reading aloud with a hand microphone the name, age and town, from a typed list, each of the 147 Monmouth County residents who died on that tragic day. Each passed the microphone and list to another so as to get as many as possible to read aloud at least one name. Then Mahoney with the Stars and Stripes flag pole in hand led the silent, non-talking pack on their southward trek. At times, spectators on the beach offered spontaneous applause for the parade of runners, as they recognized the purpose of the run.

The runners briefly stopped at the Ellanor C. Lawrence Park (also known as Memorial Park) adjacent to Lake Como that had a flagpole with the Stars and Stripes at half-mast. Here the Spring Lake Police Association had donated a plaque, dedicated September 11, 2004, set in stone, with this message: "We the people of Spring Lake remember our residents and neighbors who lost their lives in terrorist attacks against the United States of America."

Beginning with Jeffrey Neilson, of Brielle, the mourners resumed reading aloud another third of the names from the list of 147 and about half placed their hand flags and roses at the base of the plaque.

They then continued their absolutely-silent run/jog/walk/cycle on the road and boardwalk to the destination point at the Spring Lake beach gazebo across from Newark Avenue, approximately a one-mile distance. There, a piece of the World Trade Center, donated by Eddie Lennon, friend of Mahoney, had been placed on the sand and the mourners gathered around it. JSRC member Diane Cheer, of Wall, led off to finish reading the final third names from the list.

Mahoney then offered the still very-silent group an opportunity to sound aloud any name that was not on that list who also was a victim on September 11, 2001. About 25 names were heard. The song God Bless America was started and all were asked to join in. If a choirmaster would not have been impressed by the sound he/she heard, its total sincerity would have been noticed. Mahoney again thanked all for coming and asked them to give themselves a round of applause. He expressed that he was touched by now many children had attended this year’s memorial run, adding that “we had reached our goal – we will never forget.” Had someone suggested giving Mahoney applause, many hands would be hurting from clapping. The group then placed the remaining flags and flowers at the World Trade Center piece and "resumed" their Memorial Run/Jog/Walk/Cycle and returned to the starting area at their own pace with talking now permitted, under magnificently lit sunset skies. Lake Como's popular restaurant Bar Anticipation was the new destination point where “light fare” had been arranged.

One participant, a "former champion racer." who has belonged to three racing clubs, offered this meaningful comment: "I doubt if there was a more thorough display of a 9-11 remembrance anywhere in NJ or NY."

This reporter, in addition to reflecting during the run upon the lives lost on 9-11, remembered her mentor and co-writer of this event in past years, runner-writer Jim Robbins of Eatontown, a true American who will be missed.

The theme of the Memorial Run as stated by Mahoney at the 6 p.m. start is to "Run, Remember, Reflect and Resume." The Run is obvious since the idea was created by Mahoney and Bob Both who are members of the JSRC and regulars on the club's Thursday night runs in that same boardwalk area. The Remember is why the group read the names. Reflect is the reason for the silence (the only sound was the noise of the 550 running shoes meeting the surface) so that there can be time to think about and concentrate on the tragedy that occurred on 9/11 including reflecting on those poor, innocent souls that had to make that horrible decision to jump to their deaths rather than burn alive. The Resume is in response to that which President Bush had asked the citizens of our beloved America to do: "Resume your lives but never forget."

Become a Club Member or Donate

Click Here to Join or Renew a Club Membership.

Click Here to Make a Donation to the Club.

Benefit JSRC when buying from Amazon!

Please remember to use the JSRC link when you buy anything from Amazon to raise money for the club.  Click Here for the Amazon Smiles link.